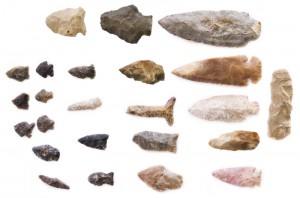 One facet of a successful project today is the adherence of current laws regarding the protection and preservation of historical or prehistoric cultural resources. Archaeological surveys ensure a property will be physically inspected by a qualified archaeologist. This ‘feet on the ground’ approach can identify artifacts (or tells) not readily recognized by the general public.

Archaeology surveys are generally conducted as transects where the terrain allows free access. Participants will line up from 5 to 25 meters apart depending on the ground coverage and the visibility of the surface soils. Common elements of the landscape such as boulders or bedrock are examined for Mortar holes or ‘slicks’ created by Native Americans to process acorns, seeds or bulbs.

Other tells that are common on archaeological surveys include flakes of obsidian, a volcanic rock that was used to make tools, along with other hard lithic material such as basalt, chert and quartzite. Other stone material includes handstones (monos) along with grinding slabs (metates) that have been shaped by processing food. Shell, ash and midden, a dark greasy soil caused by long term occupation of an area are also indication of prehistoric resources.

The importance of an early archaeological survey on property being considered for a project is that it enables intelligent decisions regarding property development. Another reason is that an archaeological study can take the longest period of time in a permitting process and delays in the treatment of a cultural resource can slow or stop a project cold.