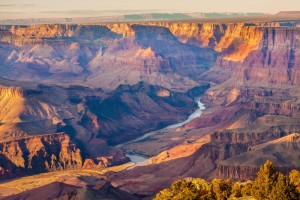 Erosion, whether caused by wind or water, can be quite devastating. Erosion in nature can also be quite beautiful.

The Grand Canyon is a great example of erosion, as are the wind-blown rocks in Utah where the wind erosion created holes in rocks over time.

As beautiful as these wonders are, it’s likely that as a developer/builder, you aren’t looking to create the next miniature Grand Canyon at your worksite (nor do you have decades to replicate this kind of erosion even if you did want to.)

Erosion control is key to protecting your project.

Stabilizing soils and slopes is essential to erosion control, preventing the devastating effects that wind and water can create in a very short time.

One of my past projects involved a very steep slope leading to a water tower that created some really big challenges to getting BMPs installed quickly and thoroughly.

In this case, the developer chose to forgo the erosion control blanketing (against our recommendations) and used the hydroseeding method with straw wattle.

Unfortunately within the course of one stormwater season, the rains came in hard and heavy, creating rill erosion through the slopes, washing away most of the seeding, and leaving behind several large piles of dirt at the bottom of the hill.

There were no discharges because of this slope’s location, but the slope had to be re-graded and compacted, then hydro seeded, blanketed, and finally re-wattled.

Had rains been less hard and heavy, grass might have been able to take hold and stabilize the slope without significant erosion, but that’s a dice roll with mother nature in any given storm season in California.

Rill erosion can be a precursor leading to larger issues such as gully erosion and larger discharges. Rill erosion begins when droplets of rain begin to dislodge soils and eventually create a rilling effect on slopes that have little to no stabilization. Over the course of a single storm, the rills begin to create mini channels for water to pass downslope, and the faster it goes, the more damage it does to the slope.

Rills left unattended will eventually begin to form gullies and washouts, where larger amounts of sediment are taken downslope and likely make their way off your project into the closest creek or stream.

Not only do rills discharge sediments from your projects, but they also compromise the compaction of your slopes required for your project to be cleared by the local agencies. Ultimately the best defense against erosion is prevention.

Have a solid plan for erosion control and stick to it.